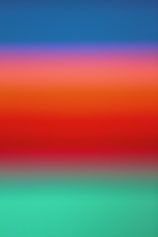 The photography that I call pictorial is a body of work I've developed with nuances of color close to the painter's palette. In function of rhythms, colors and forms, I explore abstraction through a variety of themes such as landscapes, seascapes, monochromes and other subjects always allied to a positive emotion. The abstraction of colors is associated with a light that is all-enveloping and bountiful. My pictorial photographs approximate the movement found in abstract expressionism, and more particularly in the Color Field paintings of Mark Rothko that invite contemplation and meditation. 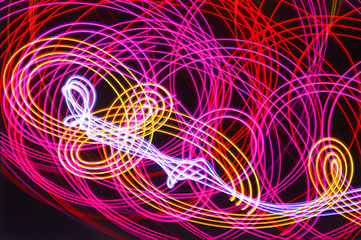 The effects achieved by the movement and dance of my camera during shooting allows me to work on the motion of light. The energy of this motion is directly captured by the camera and then fixed on the photographic print without involving any other intervention. The sources of light and the play of reflections rendered by the subject provoke a visual experience closely akin to kinetic art and the experiments of Moholy-Nagy, which "use light as a formal primary factor, creating space and movement, and eliminating the central perspective of photography."

While my other abstract photographic works are all made 'during the shot', as it were, this new series starts from existing photographs that are then manipulated by computer with reference to the visual effects of Op Art (i.e. optical art), an artistic movement explored in the 1960s by Victor Vasarely, Carlos Cruz-Diez, Bridget Riley and Julio Le Parc among others. Unlike my previous photographs, the result here is controlled and mastered to obtain a graphic visual rendering based on optical illusion or the play of optical effects. This new artistic exploration allows me to accentuate the vibration of color and light, to structure forms that are more geometrical, there by reinforcing the sensation of movement and enhancing the viewer's visual experience. 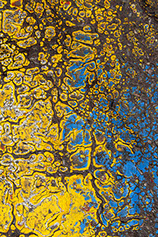 Urban Traces Project is a continuation of an aesthetic reflection on abstraction, focusing in particular on the effects of structures, textures and colors taken from the urban environment. This series consists of a set of detailed images of pedestrian crossings or ground markings of megacities around the world. At first glance, these traces on the ground may seem very similar and yet, by taking a closer look at these city footprints, the artist reveals a great variety of colors and shapes linked to their wear, abrasion or gap, disappearing little by little in the movement of urban density. These successive layers in asphalt then appear as an archaeological mirror of our urban lives. A spiritual bond with the journey of the artist’s grandmother, Marie-Thérèse Ullens, who was a traveler, photographer, filmmaker and archaeologist. I have been working on the Urban Traces Project series since 2005 besides my abstract photographic work. In this series, abstraction is no longer obtained by the movement of the camera but by the subject itself. 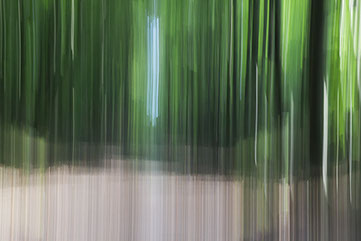 After nearly seven years of this crazy non-human life I decided to start a new life which became quickly a great relief. I discovered again life. It was like a real rebirth. I then realized how precious were my wife, my kids and… the contact with nature. It was during that period of rebuilding myself that I went for walks in the nearby Sonian Forest. Struck by the magnificence of this unique forest, I then decided I would take special pictures of it. All the waste thrown by people in this beautiful forest gave me the global concept behind my “Pure Nature” Project: how would be the nature without the human intervention? How to go back to the “original” untouched forest?